What kind of sweet treats do you enjoy and what do you crave when you get a longing for a sweet treat?  Is it  cup cakes, macaroons, a creamy creme brûlée? Cupcakes were the huge trend for a few years but now another sweet crispy on the outside and fluffy on the inside  dessert has replaced it as the new trendy sweet food! I have always loved doughnuts but felt a bit guilty when eating them.

Last summer though I was at a country style wedding in North Carolina and the dessert of choice was doughnuts! I was quite surprised by this turn of events but doughnuts seem to be  the trendy choice of dessert lovers and dessert makers everywhere these days. Even though people are very health conscious there seem to be a few exceptions to the rules that people set for themselves.


When I was planning a wedding shower at a posh restaurant in Boston I was surprised again to see that doughnuts were the choice dessert! Another occasion I went to an upscale restaurant in Phoenix Arizona and  yet again they were serving very light doughnuts with 3 different sauces.  There was a light fruit sauce, chocolate sauce and a heavier caramel sauce. Not only in the posh restaurants but pastry shops and dessert makers are "including doughnuts in their inventory" according to an article by Joe Stanton in article called "Hmm Doughnuts -Todays Trends in Doughnut Shops."


Doughnuts are loved and eaten in many countries. The history of the doughnut goes back to ancient times and there are many recipes and variations. Polish Paczkies, German Berliners, Greek Lokmades, Indian Gulabjamon, Jalebi in the Arab world, Balushahi in Nepal and Pakistan, Olliebollen in the Netherlands, Bombolone in Tuscany, Churros in Spain, Tulumba in Turkey and Moroccan Sfenj, Beignets in New Orleans and Youtaio in China are just a few of the different versions of doughnuts eaten in different parts of the world. Almost every country has it's own variety and flavors.

Doughnuts come in all different shapes and flavors, from thick and filled to thin and stick shaped.  They are  commonly made with yeast, eggs, butter and flour or yoghurt, some with cream, some with eggs, flour and water and the common way to cook it is deep frying. Some are filled with cream or jam, some are filled with custard. They may be covered in sugar, icing , glazed or maybe chocolate. Some are flaky, crumbly, and other are crisp on the outside and soft inside. Most are eaten with tea or coffee and some are dunked in chocolate or as the Chinese version is slightly salty and is eaten with rice porridge.


Doughnuts were introduced to the USA by the Dutch and have risen to be some of the
most common snack foods available. Chains like Dunkin' Doughnuts and Krispy Creme are some of the most popular purveyors of Doughnuts and millions of doughnuts are consumed all over the world every day.
So this once humble doughnut has suddenly become very hip and is served as part of the menu in some of the finest restaurants! How did this happen and why is the doughnut now regarded so highly by dessert connoisseurs? They are now on the fanciest pastry shop menus in places like NYC and now people seem to be trying out different versions in their own kitchens.
Even Whole foods Market in the USA is coming up with vegan versions and it's "Posh Vegan Donuts" are flavored with chocolate, chocolate peanut, maple, maple coconut, sugar crumb and plain cake. The reviews of these alternatives are mixed as the lack of dairy products are apparent in the texture and taste of the doughnut.

Decorated doughnuts in all flavors! 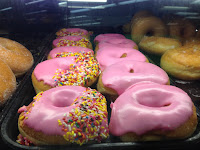 The Guardian's Homa Khaleeli in an article called "Rich Cravings:the rise of posh doughnuts" writes, "Makeover sees once humble fried dough turned into a gourmet experience-with fancy prices to match". A trend that started with a fried dough ball has now spread from the USA.  The demand for "classy doughnuts"has spread so far that even Harrods and Selfridges are selling them now and something that cost less than 50p each can now cost over 20.00 for "a box of nine!"
The doughnut has proved to be a dessert that can stand the test of time and can be recreated by  people in so many ways! It can be made at home or given a trendy makeover and sold by the poshest venues in town all over the world! 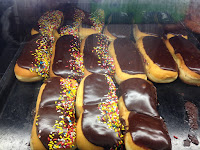 Posted by Homara Woodhead at 7:38 PM